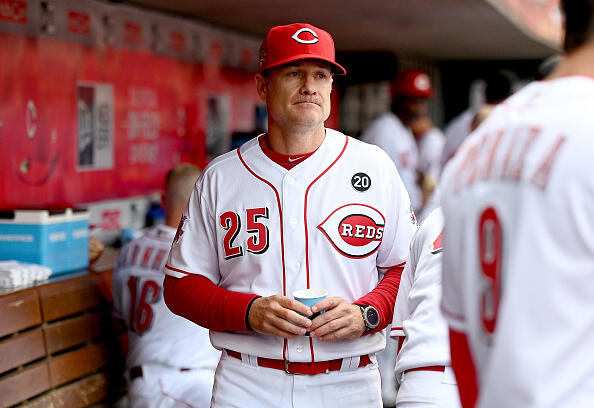 The Reds have lost more games than they’ve won this season, and since we’re no longer at a place on the calendar where we can reassure ourselves of how early it is, you as a fan find this particular fact to be annoying.

Maybe it’s because you believed before the season that the Reds would perform better than they have. Perhaps it’s because of the exasperation and fatigue that come with season after season of the Reds not winning more than they lose. It could be because of all this Reds team’s close losses and, of course, its much-celebrated positive run differential, the record should be better than the handful of games under .500 that it’s been for most of the season. It’s probably some combination of these things, with other more individualized gripes making your annoyance uniquely yours.

The 2019 Reds are a tease, having spent weeks alternating victories and defeats, existing somewhere on the lower end of MLB’s middle tier, grouped with way too many teams that hover between not being very good and not being all that bad. You know there isn’t just one reason we can point to for this overall OK-ness. Some of them are large-scale and easy to identify, while others more nuanced, demanding careful examination.

You, though, are a busy person and don’t have time for minutiae. There are spelling bee results to feign anger over and “Jeopardy!” spoilers to avoid. Life is cluttered enough without having to recite every single reason a baseball team doesn’t win as much as you’d like, and so you’ve decided to do what baseball fans do when the going isn’t great: Take the easy route and assign the bulk of the blame to the manager.

I get it. A major-league manager has two primary functions. One is to be the club’s main conduit to the public, a job that falls to the skipper by default because no one else on a team’s payroll has multiple mandated media obligations. The other is to be the shield for everyone above and beneath him, standing in to have fingers pointed his way when things go wrong, even if that means he never gets full credit when they go right.

With the exception of being made to look goofy because of the league’s insistence on middle-aged men wearing the same uniforms as their players, the gig seems easy enough, certainly compared with head coaches in other sports. Football coaches are revered for the way they work 23.5 hours per day, meticulously preparing detailed game plans that no layperson could remotely understand. Comparatively speaking, sitting at lunch and jotting down a lineup seems pretty simple. The game’s basic strategies aren’t that complex. Even if we’ll admit there are layers to every manager’s decision-making that we’ll never fully understand, something like telling a hitter to not swing at a 3-0 pitch seems much more doable than getting five players on a basketball court to learn how to exploit an opposing defense’s weaknesses.

So you complain, and on occasion, you whine about David Bell, both because the Reds aren’t winning frequently enough and because it’s so easy to complain about the manager when his team isn’t winning that it’s almost expected. He takes his starting pitchers out too early. Too much is being demanded of the bullpen. There are too many different lineups. There isn’t enough bunting, because of course the best way to tell if a manager is any good is how often he asks a batter to give up a precious out for the sake of advancing a runner a crummy 90 feet.

Oh, and Bell’s too into those stupid analytics and newfangled stats created by nerds who never played — even though, um, he played the game at the sport’s highest level for a pretty long time. I think I covered most of your issues, no?