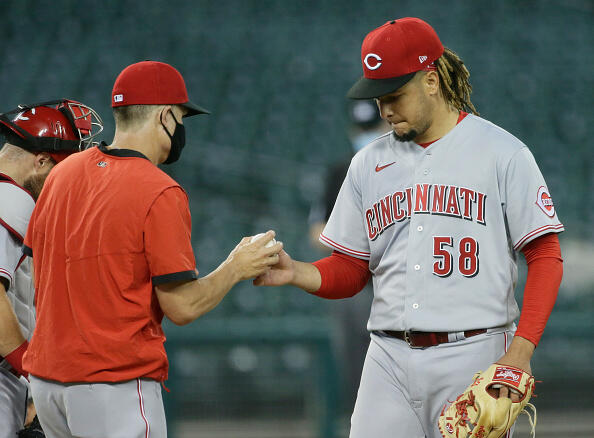 This was originally published in The Athletic.....

When Luis Castillo was removed from last Saturday’s game after a sterling six-inning, one-run, 91-pitch effort against the Tigers, I had the same reaction as everyone else who wanted to see Castillo stay in the game to continue flummoxing Detroit’s hitters for at least one more inning.

As Reds relievers melted down and wasted Castillo’s performances, I sat in my living room bemoaning to no one in particular about how the game possibly would have ended differently had manager David Bell not gone to his bullpen quite so early.

I felt similarly as Sonny Gray trudged off the Great American Ball Park mound with one out to go in the seventh inning Wednesday against the Cubs. Gray, at 92 pitches, surely still had enough left in the tank to at least finish the inning and round out a second straight dominant start.

It was hard not to feel a little salty toward Bell as Gray’s replacement, Brooks Raley, allowed five Chicago runs to score, creating a few uncomfortable moments in a game the Reds would still win easily.

It feels like having the bartender turn on the lights a few minutes after last call when a manager emerges to take the ball from a starter working on a masterpiece. It’s an instant buzzkill and it’s a decision that’s inevitable — pitchers these days throw complete games about as often as you’ll find taverns that defy the law and stay open all night — and even if it sucks the fun out of the proceedings, it usually means someone has everyone’s best interests in mind.

The one thing Bell has arguably become most known for, and the one thing more fans grumble about, is having a short leash with his starting pitchers. Admittedly, there have been more than a few times under Bell that I’ve wondered how much longer a starter could have gone, but on a macro level, the criticism is a little unfair. Only two National League teams in 2019 had starting pitchers get more outs per game than Bell’s and the Reds ranked third in the NL in pitches thrown per game started. Three Reds pitchers threw at least 94 pitches per start, and only five NL hurlers tallied more pitches per appearance than Castillo.

Even if it’s the manager whom we see coming to take the ball from his pitcher, the individual moves made during a game are more than ever the result of collaboration between the people in the dugout and the folks in the front office. And even if it’s easy for those of us who grew up in an era when starting pitchers routinely went the distance, it’s been well established that starters simply don’t go as long as they used to. As I wrote during the middle of the season last June, Bell’s managing style — for better or worse — is the new norm.

If not for the COVID-19-induced disruptions to the MLB schedule, and the making-it-up-on-the-fly nature of the season, the biggest story since Opening Day has been the startling amount of attrition to pitching staffs just within the first week. The carnage includes three former Cy Young winners and nearly three dozen pitchers who have either been bumped from starts or placed on the injured list since right before Opening Day.

The NL Central hasn’t been spared. The Cardinals announced this week that Miles Mikolas will require surgery on something called a flexor tendon and will miss all of 2020. The Brewers acquired Brett Anderson and Josh Lindblom this offseason, but Anderson began the season on the IL and Lindblom was pulled from his Milwaukee debut in the fourth inning because of back cramps. The Cubs began the season without José Quintana, who injured his thumb in a dishwashing mishap, and even if the Pirates’ remote chances took a hit when Chris Archer’s thoracic outlet surgery in June added to a list of missing starters that already included Jameson Taillon.

And the Reds, since Opening Day eve, have already placed Anthony DeSclafani, Robert Stephenson and most recently Wade Miley on the injured list.

Every season’s outcome is shaped by injuries, but with the shortened season providing so little time for players to recover, the importance of each game more magnified and the absence of a minor-league season depriving players of rehab assignments, the impact of injuries is more profound than over a 162 games. We shrug our shoulders hoping for the best whenever we hear about an early-season ailment causing a pitcher to miss a few starts, but those few missed starts are far more likely to be the pivot point for a team either making or sitting out the postseason.

These injuries crystallize the single most important aspect of a manager’s job, particularly one like Bell’s overseeing a small-market team built on the strength of a high-upside starting staff. If the mantra for the Reds two offseasons ago was to “Get the pitching,” the directive for Bell now that they have it is slightly altered: “Protect the pitching.”

Read more by going to The Athletic.